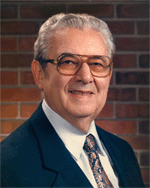 Herbert C. Brown was a Nobel Laureate and Purdue professor of chemistry best known for his groundbreaking work with boron-containing compounds.

Professor Brown discovered that diborane, the simplest combination of boron and hydrogen, could be combined with alkenes to produce compounds known as organoboranes in a process called hydroboration. Organoboranes are versatile reagents that have been used to synthesize many important pharmaceuticals, including Prozac and Lipitor. For this work, Professor Brown shared the 1979 Nobel Prize in Chemistry with the German chemist Georg Wittig.

Professor Brown was elected to the National Academy of Sciences in 1957 and the American Academy of Arts and Sciences in 1966. In addition to the Nobel Prize, he received numerous honors and awards, including the National Medal of Science in 1969 and the American Chemical Society Priestley Medal in 1981. He received 14 honorary doctorate degrees, including one from his alma mater, the University of Chicago. Purdue's chemistry building is known as the Herbert C. Brown Laboratory of Chemistry in his honor.

Professor Brown was born in London, England, and grew up in Chicago. After his father passed away, he left high school to work in the family's hardware store. He later recalled that he had little interest in the business and spent most of his time reading, which led his mother to take over the store and send him back to school. He enrolled in Crane Junior College, intending to major in electrical engineering, but quickly changed his mind after taking a chemistry class. Working in the home laboratory of a former Crane professor, he met Sarah Baylen, a fellow chemistry student who would become his wife. He earned his bachelor's degree from the University of Chicago in 1936.

Professor Brown's interest in boron compounds was sparked by Alfred Stock's "Hydrides of Boron and Silicon," a graduation gift from Baylen that she reportedly chose because it was the cheapest chemistry book in the University of Chicago bookstore. He went on to earn a doctorate from the University of Chicago in 1938. After graduation, unable to find a job in industry due to the economic conditions at the time, he stayed as a postdoctoral researcher. During this time, he helped discover sodium borohydride, a powerful reducing agent.

In 1943, Professor Brown became an assistant professor at Wayne State University and was promoted to associate professor in 1946, before leaving to become a full professor at Purdue in 1947. He remained at Purdue for the rest of his career, and retired in 1978 as the R.B. Wetherill Research Professor of Chemistry. At Purdue, he supervised many students and postdoctoral researchers, including Ei-ichi Negishi, now the Herbert C. Brown Distinguished Professor at Purdue and a 2010 Nobel Laureate.