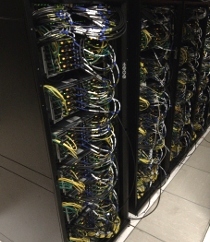 Carter was launched through an ITaP partnership with Intel in November 2011 and was a member of Purdue's Community Cluster Program. Carter consisted of HP compute nodes with two 8-core Intel Xeon-E5 processors (16 cores per node) and between 32 GB and 256 GB of memory. A few NVIDIA GPU-accelerated nodes were also available. All nodes had 56 Gbps FDR Infiniband connections. Carter was decommissioned on April 30, 2017.