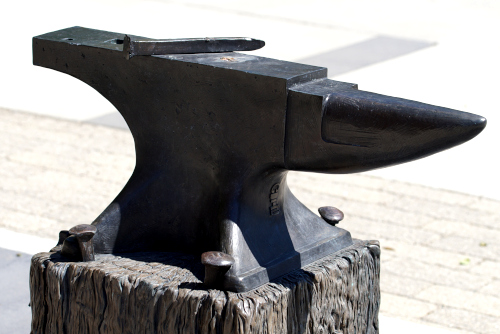 Purdue University will soon be the home of Anvil, a powerful new supercomputer that will provide advanced computing capabilities to support a wide range of computational and data-intensive research spanning from traditional high-performance computing to modern artificial intelligence applications.

Anvil, which is funded by a $10 million award from the National Science Foundation, will significantly increase the capacity available to the NSF's Extreme Science and Engineering Discovery Environment (XSEDE), which serves tens of thousands of researchers across the U.S., and in which Purdue has been a partner for the past nine years. Anvil will enter production in 2021 and will serve researchers for five years. Additional funding from the NSF will support Anvil's operations and user support.

The name "Anvil" reflects the Purdue Boilermakers' strength and workmanlike focus on producing results, and the Anvil supercomputer will enable important discoveries across many different areas of science and engineering. Anvil also will serve as an experiential learning laboratory for students to gain real-world experience using computing for their science, and for student interns to work with the Anvil team for construction and operation. We will be training the research computing practitioners of the future. Learn more about Anvil's mission in the Anvil press release.

Anvil will be built in partnership with Dell and AMD and will consist of 1,000 nodes with two 64-core AMD Epyc "Milan" processors each, and will deliver over 1 billion CPU core hours to XSEDE each year, with a peak performance of 5.3 petaflops. Anvil's nodes will be interconnected with 100 Gbps Mellanox HDR InfiniBand. The supercomputer ecosystem also will include 32 large memory nodes, each with 1 TB of RAM, and 16 nodes each with four NVIDIA A100 Tensor Core GPUs providing 1.5 PF of single-precision performance to support machine learning and artificial intelligence applications.

All Anvil nodes will have 128 processor cores, 256 GB to 1 TB of RAM, and 100 Gbps Infiniband interconnects.

Anvil nodes will run CentOS 8 and use Slurm (Simple Linux Utility for Resource Management) as the batch scheduler for resource and job management. The application of operating system patches will occur as security needs dictate. All nodes will allow for unlimited stack usage, as well as unlimited core dump size (though disk space and server quotas may still be a limiting factor).