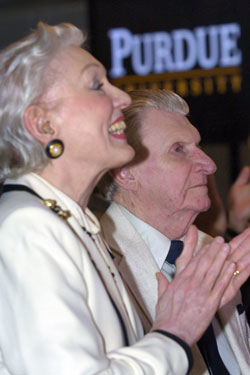 LaNelle E. (Nerger) Geddes was born on September 15, 1935 in Houston, Texas to Carl O. and Evelyn Nerger. She received a B.S. in Nursing from the University of Houston in 1957, and earned a PhD in Biophysics there in 1970. After receiving her PhD, Geddes taugh at the Texas Women's University and in the Department of Physiology at Baylor College of Medicine in Houston.

Geddes joined the faculty at Purdue in 1975 where her husband, Leslie A. Geddes, was the head of the Department of Biomedical Engineering. Lanelle started in the School of Nursing as the Assistant Head of the Department. In 1980, she was promoted to the Head of the Department and served as Head until 1991. While at Purdue, Geddes challenged traditional perceptions of nurses as merely doctors' assistants who were wrongly believed to have no expertise or skill for diagnosis and treatment. In addition, Geddes was also instrumental in instituting a four-year nursing baccalaureate program and starting the Freshman Scholars, a program that provided scholarships to outstanding incoming freshman.

Geddes' research was focused on cardiovascular physiology. Her teaching emphasized the impact of human pathophysiologic alterations and their influence on nursing and medical care. Her inclusion of pathophysiology encouraged her students to make better clinical judgments and to be stronger patient advocates. From 1996-2003, Geddes also taught pathophysiology to IU School of Medicine students at Purdue University. Geddes retired as a professor emeritus in 2003.

Geddes' research and teaching had far-reaching impacts, and she received many awards over the course of her career. She was an AMOCO Foundation (Murphy) Award winner, a fellow of the University Teaching Academy, and a Helen B Schleman Gold Medallion Awardee. She also received the Lafayette YWCA Salute to Women Award and the Westminster Village Lifetime Service Award for her work within the community. Geddes passed away on January 25, 2016.

Link to section 'Citations' of 'Biography of Lanelle Geddes' Citations