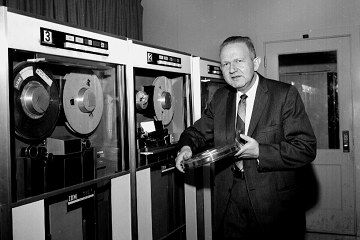 In the private sector, Rosen was an associate research engineer with Burroughs Corporation (1951-52) and manager of their Electrodata Division's Eastern Applied Mathematics Section from 1956-1958. He was manager of Computer Programming and Services (1958-1960) and a Computer and Programming Systems consultant (1960-1962) at Philco Corporation. Rosen was chief software designer for the world's first transistorized computer, the Philco TRANSAC S-2000.

In 1962, Rosen joined Samuel Conte as one of the charter faculty members in Purdue's Computer Science Department and was a professor of mathematics and computer science (1962-1966 and 1967-1991). He was also professor of engineering and associate director of computing at the State University of New York at Stony Brook (1966-67).

From 1968-1987, Rosen served as director of Purdue's Computing Center where he and the professionals he assembled took Purdue to the forefront of high-performance computing at American universities. Purdue acquired large, high-performance computing systems in the mid-1960s and was one of only three universities operating supercomputers during the 1970s and into the mid-1980s.

Rosen became active in the Association for Computing Machinery (ACM) in 1947, first on the languages committee that eventually led to the ALGOL programming language, and then as first managing editor of the Communications of the ACM. He wrote extensively on practical systems programming and authored his major book, Programming Systems and Languages (McGraw-Hill, New York), in 1967.

In 1979, Rosen participated in the founding of the American Federation of Information Processing Societies (AFIPS) Annals of the History of Computing, contributed to the publication, and served as an editor until his death. In 1984, Rosen received the ACM Distinguished Service Award for his "widespread, extensive, and continuing service to the computing community."

Saul Rosen retired as director of Research Computing in 1987 and died in West Lafayette, IN on June 9, 1991.