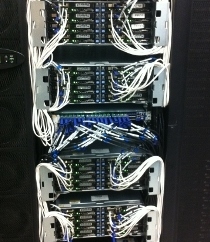 Peregrine 1 was a state-of-the-art cluster for the Purdue Calumet campus operated by ITaP from the West Lafayette campus. Installed on June 26, 2012, Peregrine 1 was the second major research cluster to have been hosted on the Calumet campus. The cluster has been consequently relocated to the West Lafayette campus on August 19, 2015. Peregrine 1 consisted of HP compute nodes with two 8-core Intel Xeon-E5 processors (16 cores per node) and either 32 GB or 64 GB of memory. All nodes also featured 56 Gbps FDR Infiniband connections. Peregrine 1 was retired on October 12, 2016.