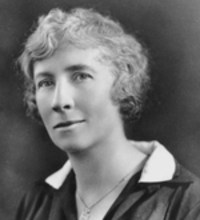 Lillian Moller Gilbreth was an industrial engineer and efficiency expert who became Purdue’s first female engineering professor when she joined the faculty in 1935.

Professor Gilbreth’s research focused on combining psychology and engineering to improve efficiency in the workplace and home, and she pioneered the field now known as ergonomics. To improve household efficiency, she invented a number of kitchen devices, including the foot pedal trash can, refrigerator door shelves and the electric mixer.

Among many other honors, she was the first woman elected to the National Academy of Engineering (1965), the second female member of the American Society of Mechanical Engineers (1926) and the first woman to receive the Hoover Medal (1966). In 2001, the National Academy of Engineering established the Gilbreth Lectures in her honor as a means of recognizing outstanding young American engineers. She received more than 20 honorary degrees.

Professor Gilbreth’s family life with her husband and research collaborator Frank and their 12 children is the subject of the autobiographical novels “Cheaper by the Dozen” and “Belles on Their Toes,” which were written by two of their children and describe how the Gilbreths applied their efficiency studies in their home. The novels were made into popular films starring Myrna Loy.

Professor Gilbreth was born in Oakland, California and earned her bachelor’s degree in English literature from the University of California-Berkeley in 1900. She began studying for a master’s degree at Columbia University, but an illness forced her to return home and she earned her master’s degree in literature from Berkeley in 1902. When she received a doctorate in applied psychology from Brown University in 1915, she became the first mother to receive a doctorate from the university.

With her husband Frank, Professor Gilbreth developed a new way of performing time and motion studies, which break tasks into steps to evaluate the efficiency of workplace processes. The Gilbreths used a video camera to record work processes, and studying the films allowed them to better design equipment to improve efficiency and reduce workers’ fatigue, a concept that eventually developed into the field of ergonomics.

Purdue Libraries’ Archives and Special Collections is home to the books, working papers and family archives of Lillian and Frank Gilbreth. Researchers from around the world visit every year to study the Gilbreths’ papers.