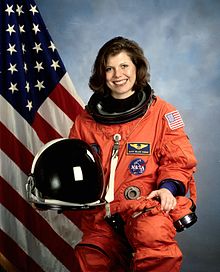 Dr. Weber grew up in Ohio and earned her bachelor's degree in chemical engineering with honors from Purdue in 1984. She went on to earn a doctorate in physical chemistry from the University of California-Berkeley in 1988 and a master of business administration degree from Southern Methodist University in 2002.

Dr. Weber was selected by NASA to become an astronaut in 1992. She served on two space shuttle missions, STS-70 Discovery in 1995 and STS-101 Atlantis in 2000, traveling a total of 297 earth orbits and 7.8 million miles. On the Discovery mission, Dr. Weber successfully deployed a $200 million NASA communications satellite to its orbit 22,000 miles above Earth and performed biotechnology research related to colon cancer.

On the Atlantis mission, which was the third shuttle mission devoted to the construction of the International Space Station, Dr. Weber operated the shuttle's 60-foot robotic arm to maneuver spacewalking crewmembers along the Station's surface and directed the transfer of more than three thousand pounds of equipment.

In addition to her work in the Astronaut Corps, Dr. Weber held a variety of other positions within NASA, including working as the Legislative Affairs liaison at NASA headquarters in Washington, D.C. She is the recipient of the NASA Exceptional Service Medal.

After leaving NASA, Dr. Weber was the Vice President for Government Affairs and Policy for nine years at the University of Texas Southwestern Medical Center in Dallas, Texas. She is the founder of Stellar Strategies, LLC, consulting in strategic communications, technology innovation and high-risk operations. She has over 20 years of experience as a speaker and has been a keynote speaker at many conferences and a frequent TV news guest.

Dr. Weber is an active competitive skydiver, who has logged nearly 6,000 skydives and won two dozen medals at the U.S. National Skydiving Championships.